Now that you have mastered how to graph one and two variable linear equations:

It is time now to learn how to graph linear inequalities?

First step: Graph the inequality as if were and equation

Remember that this rectangular coordinate grid is just made up of a bunch of ( x , y ) points.

All the points ON the line work in this part:

Now, we just need to find all the points that work in this part:

Here’s how we find these points:

We just pick a point OFF the line and test it!

So, our answer is this:

Midterm is this Friday, November 6.

They created a fun little game called “rationalizing the denominator.”

Here’s how it goes:

What if we needed to get the radical out of this denominator?

Same game — we still multiply by 1…

The  1 will be made up of this guy’s conjugate.

Well now, that was helpful wasn’t it?

So, the conjugate of

Check out how it works:

Put ( ) around everyone or you’re
really going to mess things up!

Not only did we ditch the radical in the denominator,
in this one, we ditched the whole denominator.

Nothing to fear.  It’s just a different notation for what you’ve already been doing.

Not that bad, is it?

This notation has some advantages because it will help you understand some things better.

Now, we can show why this rule works:

Here are some examples of really strange answers you have get when you are solving two equations.
Let’s graph these two lines:

What’s the solution?  They have to intersect to get a solution.  But, that’s never going to happen since these lines are parallel.  So, there is no (x, y) that is going to work in both equations.

When you are solving by elimination or substitution, you’re sometimes going to get a false statement like

For the best answer, you’ll want to write something like this:

The other strange thing that can happen is that the two lines can be lying right on top of each other — they are the same line.

How will you know when this strange answer announces itself to you?

When you’re solving by elimination or substitution…  you’ll be going along…  and you’ll get this:

So, what does this mean for our answer?

You should write something like this for your answer:

The following table will guide us to choose the best method to solve.

Let’s just do one and you’ll see how it works:

See how these guys are the same,
but with a different sign?

If we add the two equations — straight down, those x critters are going to drop right out!

We’ve got one of them…  Now, we just need to get the x.  To do this, you can stick the y into either of the original equations…

The second equation is easier:

Solve this system of equations using the addition or subtraction method.  Check.

Most of the time they aren’t set up that nicely.  You’ll usually have to do a little dinking before something will drop out.

Look at this one:

If we just add straight down, nothing’s going to drop out and we’ll just get a mess.

But, check out the y guys:

Remember to hit each guy!

Now, stick the x guy into either of the original equations.  I’m going to go for the first one:

Let’s look at three more examples using the “addition” or “subtraction” method for systems of equations:

Solve the following system by substitution.

The idea here is to solve one of the equations for one of the variables, and plug this into the other equation. It does not matter which equation or which variable you pick. There is no right or wrong choice; the answer will be the same, regardless. But — some choices may be better than others.

Now I’ll plug this in (“substitute it”) for “y ” in the first equation, and solve for x:

Now I can plug this x-value back into either equation, and solve for y. But since I already have an expression for “y =”, it will be simplest to just plug into this:

What is a system of equations?

A set of equations, for example, two equations with two unknowns, for which a common solution is sought is called a system of equations.

Can you think of two numbers that when added together total 7, but when subtracted from each other their difference is 1?

Put each equation in slope intercept form  and then graph them.

The point of intersection of the two lines, (3,0), is the solution to the system of equations.

This means that (3,0), when substituted into either equation, will make them both true.

Systems of equations can be solved algebraically or graphically. Usually, the problem is to find a solution for x and y that satisfies both equations simultaneously.

Graphically, this represents a point where the lines cross. There are 3 possible outcomes to this (shown here in blue, green, and red):

The two lines might not cross at all, as in 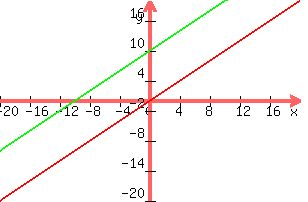 y = x
y = x + 10.
This means there are no solutions, and the system is called inconsistent.

If you try to solve the system algebraically, you’ll end up with something that’s not true, such as 0 = 10.

Whenever you end up with something that’s not true, the system is inconsistent.

The two equations might actually be the same line, as in 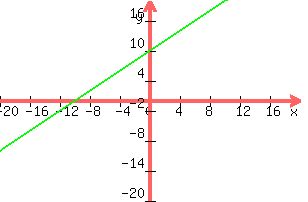 y = x + 10
2y = 2x + 20.
These are equivalent equations. The lines are actually the same line, and they ‘cross’ at infinitely many points (every point on the line). In this case, there are infinitely many solutions and the system is called dependent.

If you try to solve this system algebraically, you’ll end up with something that’s true, such as 0 = 0.

Whenever you end up with something that’s true, the system is dependent.

The two lines might cross at a single point, as in 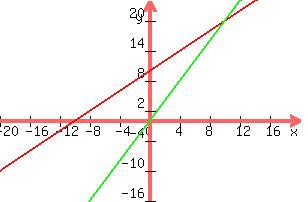 y = x + 10
y = 2x.
If you try to solve this system algebraically, you’ll end up with something that involves one of the variables, such as x = 10. In this case, there is just one solution, and the system is called independent.

Here are a couple of handy tables for recognizing what type of system you’re dealing with.

From the algebraic perspective:

From the graphical perspective:

There are two efficient and accepted methods for graphing lines — this is one of them.

On to method 1… First of all, you’ll need to know what an intercept is!

The intercepts are where a graph crosses the x and y axes.

Not only are these the easiest points to find, as you’ll see later in math, they are the most important points.

Here’s how this works… Let’s graph

Let’s look at the first one:

The easiest thing to do is to just cover up the 3x part with your finger:

Now, let’s look at the second one:

Just cover the y guy with your finger:

Since we just need two points to draw the line, we’re set!

Lines are used to keep track of lots of info — like what is your GPA (grade point average) for all your classes..   Whether the line is tilted up or down, all of the sudden, gets REALLY important!

I am now going to introduce you to

For slopes, Pierre is going to walk on the lines from left to right
— just like we read.

Uphill slopes are positive slopes. That’s good because that means your GPA is going up
The slope will be a positive number like 5 or 2/3.

Downhill slopes are negative slopes. That means your GPA is going down.
The slope will be a negative number like -7 or -1/3

I think the most useful form of straight-line equations is the “slope-intercept” form:

This is called the slope-intercept form because

“m” is the slope and

“b” gives the y-intercept.

I like slope-intercept form the best. It is in the form “y=“, which makes it easiest to plug into, either for graphing or doing word problems. Just plug in your x-value; the equation is already solved for y.

But the best part about the slope-intercept form is that you can read off the slope and the intercept right from the equation. This is great for graphing.

y=5x+3 is an example of the Slope Intercept Form and represents the equation of a line with a slope of 5 and and a y-intercept of 3 .

The easiest way to graph such a line, is to plot the y-intercept first. Then, write the slope m in the form of a fraction, like rise over run, and from the y-intercept, count up (or down) for the rise, over (right or left) for the run, and put the next point. Then connect the two points and this is your line.

Start by graphing the y-intercept by going up 2 units on the y-axis.
From this point go UP (rise) another 3 units, then 1 unit to the RIGHT (run), and put another point. This is the second point. Connect the points and it should look like this:

Start by graphing the y-intercept by going up 2 units on the y-axis.
From this point go UP (rise) another 3 units, then 5 unit to the RIGHT (run), and put another point. This is the second point. Connect the points and it should look like this: